Amethyst for Your New Years Partying!

FUN FACT: Did you know that the name Amethyst is derived from the ancient Greek word “amethustos”, which translates to “not drunk or intoxicating”. Goblets made of Amethyst were once used to hinder inebriation (drunkenness).

According to Greek mythology, Amethyst was a young virgin who became the object of wrath of the Greek God Dionysus after he became intoxicated with red wine. When Amethyst cried out to Goddess Diana for help, she immediately turned the girl into a white, shimmering stone (Quartz). When Dionysus realized what had happened and felt remorse for his actions, his tears dripped into his goblet of red wine. The goblet overturned, and the red wine spilled all over the white rock, saturating it until it became the purple Quartz that is now known as Amethyst. (source: jewelsforme.com)

Have a very happy and safe New Years! May 2016 be filled with love, happiness, prosperity, and crystal blessings! ~Jen 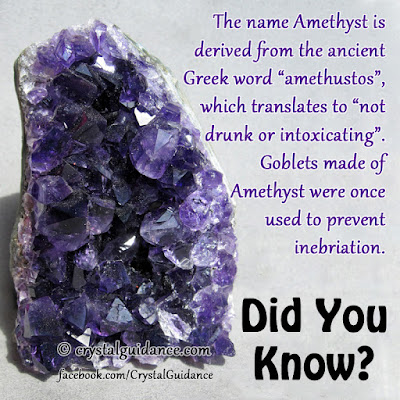 Posted by Crystal Guidance at 1:27 PM