This post was inspired by my friend, Andy from Of Divine Essence. Plus you know I love any excuse to show off my pretties! I couldn't play 'show and tell' without giving you guys more information about each crystal, so listed below are some of the properties for the most common of the Aura Quartz crystals.

The Aura Quartz family is made up of stunning, high vibration crystals. They are all man-enhanced. An Aura Quartz is a Clear Quartz crystal that is heat treated in a vacuum and infused with the vapors of specific metals, which created a permanent bonding on the surface of the Quartz. This merges the properties of the metal used with the properties of Quartz. Please note that Danburite is also now becoming enhanced in this way as well. The “Aura” portion of these crystal’s names was given due to the subtle flashes of iridescent rainbow colors on Quartz.

Angel Aura (also known as Opal Aura) is bonded with Platinum and Silver. It is a tranquil and uplifting crystal much like a rainbow. It cleanses the aura and helps to balance all of the chakras. Angel Aura can assist you in reaching a deeper meditative state as well as connecting with Angels and spirit guides. It brings you into union with the Divine and cosmic consciousness.
Chakras: Crown and Higher Crown

Aqua Aura is bonded with Gold. This crystal holds many similar properties to Aquamarine. It works with the Throat and Third Eye chakras to allow you to communicate your highest truth and speak from the heart. Aqua Aura also increases psychic skills and protects you against psychic or psychological attacks. As with the other Aura Quartzes, Aqua Aura cleanses the aura. It also releases any stress from the auric body and repairs any holes in your aura. Work with Aqua Aura with other crystals to enhance their healing properties.
Chakras: Throat, Third Eye, Crown, and Higher Crown

Champagne Aura (also known as Smokey Aura) is bonded with Gold and Indium. Connecting the Sacral up to the Crown, Champagne Aura helps to ground spiritual ideas into physical reality. Its grounding and protective energies can be used to gently dissolve negative energies and emotional blocks, as well as provide protection from forces that are present in the Ethereal Realm.
Chakras: Sacral, Solar Plexus, and Crown

Rose Aura (similar to Ruby Aura, only lighter in color) is bonded with Platinum. It has a powerful connection to universal love and fills you with unconditional love. This imbues the whole body with love and transmutes any deeply held doubts about self-worth.
Chakras: Root, Heart, and Higher Crown

Tangerine Aura (also known as Melon Aura) is bonded with Gold and Iron Oxide. This crystal has an energy that is very similar to Tangerine Quartz. Many of the properties are the same between these two crystals. Tangerine Aura has a strong connection to the Sacral chakra, removing any creativity or sexual blockages and allows these energies to flow freely. It can also assist someone who is trying to overcome self-esteem issues. Tangerine Aura grounds spiritual vision and manifests it into your everyday life.
Chakras: Root, Sacral, and Solar Plexus

Tanzine Aura (also known as Indigo Aura, Tanzan Aura, or Celestial Aura) is bonded with Gold, Indium, and Niobium. It has similar energies to Tanzanite. In fact, it is named after Tanzanite due to their similar color. This crystal is wonderful for Indigo children or adults. This includes ADD and ADHD children that are very often Indigos. Tanzine Aura connects with the higher chakras and aids in communicating psychic visions or dreams. It is the perfect crystal for intuitives, light workers, mediums, channelers, readers, and shamans as stimulates psychic abilities and links together the Third Eye and Crown chakras so that they can work as one. Tanzine Aura can facilitate communication with the spirit world, angels, and other-worldly beings.
Chakras: Throat, Third Eye, Crown, and Higher Crown

Titanium Aura (also known as Rainbow Aura) is bonded with Titanium. Due to its color, Titanium Aura energizes the entire chakra system, as well as the physical body. It is stimulating to the auric field and meridians and infuses the aura with the rainbow spectrum of light. It increases energy, vitality, and mental awareness. It can help you to feel grounded, centered, and energized all at the same time. It is beneficial for all relationships, especially dysfunctional ones as it brings insight about the relationship and aids you in releasing negative emotions.
Chakras: All 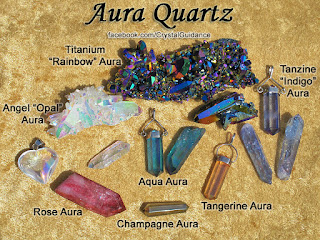 Posted by Crystal Guidance at 2:31 PM No comments: